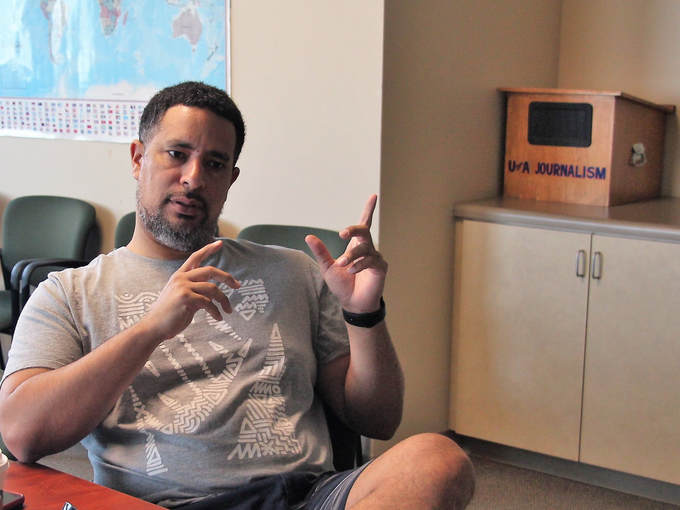 Photo credit: Grace Hardy
Cultural competence is the ability to interact with people, despite the difference in cultures, to be respectful to the cultural and linguistic needs of a diverse population.

America is considered a melting pot, a country filled with voices from all over the world;  however, people’s ignorance of cultures other than their own is still a large problem.

The lack of representation in work places and media is also a reason why acknowledging our differences isn’t as recognized as it should be.

One group affected by a lack of knowledge from the public is the Deaf community. Saul Bookman, a content manager for FOX Sports Arizona, is a hearing child of Deaf adults. Bookman, as a young child, developed competency in hearing and Deaf culture.

“They call us CoDAs — Children of Deaf Adults,” said Bookman, a recent graduate of the University of Arizona School of Journalism’s master program. For his master’s thesis he made a documentary about a deaf basketball coach who received an organ transplant, seemingly showing the Deaf and hearing cultures.

Bookman recalls having a hint of embarrassment from having deaf parents. He was not familiar with others who were like him, except for his two sisters. As children, they played with other children just the same. Not much thought was on his parents, because he was used to the side looks; however, he did have a lot of responsibility growing up.

“If your parents are going somewhere to buy a car,” Bookman admits, “guess who’s interpreting. If they’re going to buy a house, guess who’s interpreting it. I knew what an escort was by the age of 7. I knew how to close on a house, [and] I knew how to qualify for a house in second grade. That’s one of the things that was very interesting growing up.”

However, even though Bookman was a CoDA, he wasn’t exposed much to the Deaf community; he had a stereotype about them because of his parents. His parents were not well educated, he admitted, and he thought that was part of being deaf, until three years ago.

“I thought that deaf people didn’t go through the kind of education that hearing people could go through, because I thought that they had missed out on a lot of different things but that’s far from the truth,” Bookman explained.

“It’s no different than me and you conversing right now,” Bookman pointed out. “I was kind of taken aback, thinking, ‘I have this all wrong.’”

In his first year at the University of Arizona, Bookman took a course to refresh his sign skills. In class, he was associated with deaf people more than before. He wishes hearing people knew more about the Deaf culture and deaf people

Bookman, who is mixed with black and white, said that being a CoDA wasn’t the only struggle growing up. He had to develop other cultural competencies as well. During the first year that Martin Luther King Jr. Day was celebrated in Arizona when he was in middle school, Bookman’s white classmates threw rocks at him.

When asked what benefits he thinks could come from cultural competence, Bookman said society would be more well-rounded.

“One of the great things in this world, especially here in America is we have the ability to take a little bit from each culture to make ourselves a well-rounded person, and the more you do that, the more you put yourself in someone else’s shoes, the more [you] have to offer.”

Telis, the AZPM mental health reporter, said that cultural competence can have a significant impact on people’s health.

Someone who is unaware of certain cultures can feel unprepared to deal with big life decisions, as did November Prentiss, who manages in faculty affairs at the UofA College of Social and Behavioral Sciences. She and her partner are looking to adopt a child as a result of an accident in 2016 that left her unable to have biological children.

When they were looking to adopt, they said they did not need a child to look like them for that child to be theirs. That’s when the head of the adoption agency said that their child will likely be non-white. Prentiss  and her partner are both white.

Prentiss and her partner forced a large question: How would they teach a child a culture that isn’t their own while also not appropriating one?

“Even though I’m 39, thoroughly educated and vigilant about awareness,” Prentiss said, “I am still ignorant to how I will do the hair of an adopted African American child.”

When she spoke about this possible concern to her friends, who were black, they offered to help with the support the child regarding culture if it ever came to it.